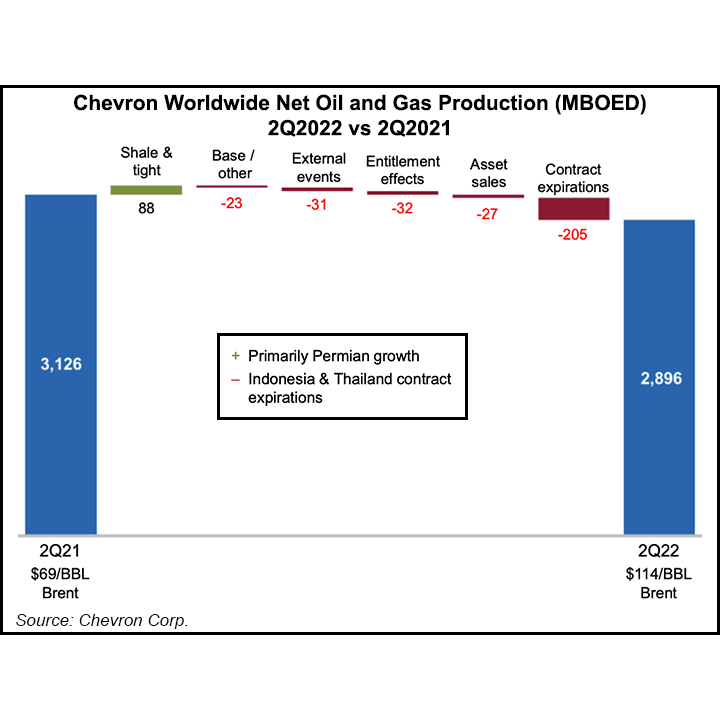 Amid the upsurge in energy demand, Johnson told analysts that Chevron’s investment in the basin this year is expected to be “$1 billion more than last year, and we’re also seeing the number of wells that we put into production increase”.

Chevron expects to bring more than 200 wells into production in the Permian this year, which will increase production by approximately 15% per year between 700,000 boe/d and 750,000 boe/d. The figure is expected to reach 1 million boe/d by 2025, according to management.

Chevron added two Permian rigs in July, bringing its rig count in the basin to 10. The supermajor plans to maintain the rig count through the end of the year, Johnson said.

The platform’s role as an indicator of activity has changed in just a few years, Johnson noted. He explained that “one of our rigs today is drilling the equivalent of what two rigs could do in 2018.”

Meanwhile, each hydraulic fracturing crew is “also completing about double the work they were doing in 2018,” he said. For example, simultaneous fracturing, also known as simul-frac operations, now allows four wells to be completed at once, cutting cycle time by a quarter, management said.

Annual Permian investments are expected to reach $4 billion by 2024 and remain more or less stable thereafter, according to Johnson.

There are also about nine net rigs operating on Chevron’s unmined Permian acreage, “which also contributes significantly to our production profile,” he said.

Permian production is “some of our most carbon-efficient barrels in the portfolio,” Breber added.

“We have more than doubled our investments from last year to develop both traditional and new energy sectors,” said CEO Mike Wirth. “With Permian production more than 15% higher than a year ago and now one of the leading producers of renewable fuels in the United States, Chevron is increasing its energy supplies to help meet the challenges facing world markets.”

During the quarter, Chevron completed its acquisition of Renewable Energy Group Inc. and completed the formation of a renewable fuels joint venture with Bunge North America Inc.

Chevron’s carbon capture and storage (CCS) efforts also continued to progress during the quarter, with the launch of a project to reduce the carbon intensity of its California operations and the expansion of a joint -venture to develop the Bayou Bend CCS offshore hub. Texas.

LNG exports are on the rise

On the LNG front, Chevron has signed agreements to export 4 million metric tons/year (mmty) of liquefied natural gas (LNG) from the Gulf Coast starting in 2026.

Chevron also aims to bolster LNG supply to a gas-starved global market through the Angola LNG terminal and the Gorgon and Wheatstone natural gas developments in Australia.

Gorgon and Wheatstone shipped a total of 87 LNG cargoes in the first half of 2022, up 10% annually. The Gorgon Stage 2 expansion, meanwhile, is expected to reach first gas by September.

Chevron and its partners in Angola, including Italian major Eni SpA, plan to develop two gas fields offshore Angola to supply the terminal, which until now relied mainly on associated gas volumes linked to the oil production. First gas from the Quiluma and Maboqueiro fields is expected by 2026, with production expected to peak at 330 MMcf/d, the companies said.

Chevron also sanctioned the Ballymore deepwater project in the Gulf of Mexico, which is expected to require a gross investment of about $1.6 billion, management said. Oil production from Ballymore would come from an existing facility with a capacity of 75,000 bpd.

Global production averaged 2.9 million boe/d, compared to 3.13 million boe/d in 2Q2021, the decline being mainly due to contract expirations in Thailand and Indonesia. The decline was partially offset by the production of shale and tight reservoirs, mainly from the Permian.